The main European producers are Spain, France, Italy and the United Kingdom. 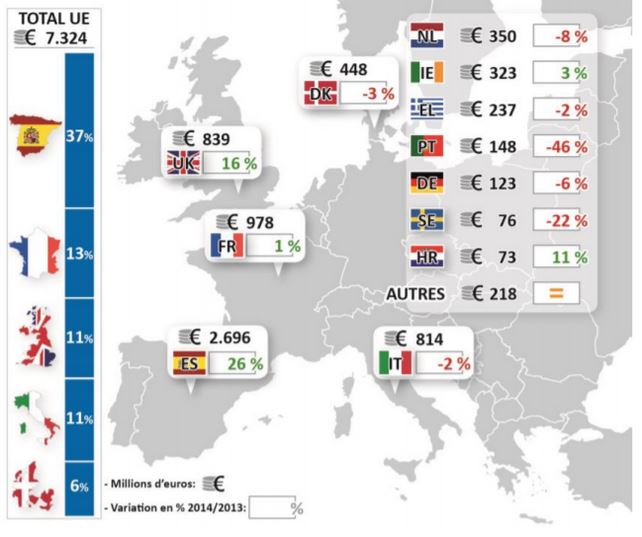 French fisheries are quite varied and can be categorised according to their catch method (towed/trawl gear and passive/static gear) and/or their method of vessel operation (industrial fishing, deep sea, coastal). To better understand the different fishing types, visit this website: Ifremer.

–        Brexit: Closing British waters to European vessels could have significant repercussions for the Brittany and Normandy deep sea fishing fleet which often works in those waters.

–        Fleet renewal: Ageing vessels (average age of 26 years) struggle to get replaced, despite a favourable situation since 2015 with higher initial sale prices for fish and relatively low fuel prices.

–        Vessels of the future: There are many studies currently under way to design the fishing vessels of tomorrow in order to achieve lower fuel consumption, better selectivity, greater onboard comfort for the crew, and greater catch value maximisation.

–        Lack of labour: Despite attractive wages, there are few young sailors starting in the fishing profession. This means that ship owners sometimes have to engage foreign labour to compensate for that lack.

Global aquaculture is dominated by Asia, which represents nearly 90% of aquatic animal production. Production is highly diversified and involves fish, algae, molluscs and crustaceans. Aquaculture accounted for 55% of production in Asia in 2014, yet it only accounted for 18% in Europe. The main European Union producers by value are the United Kingdom, France, Greece, Spain and Italy. Bivalve molluscs (mussels, oysters and clams) figure dominantly in Spain, France and Italy. The United Kingdom primarily produces salmon, while Greece mostly produces bass and sea bream. Norway is the global leader in salmon production. 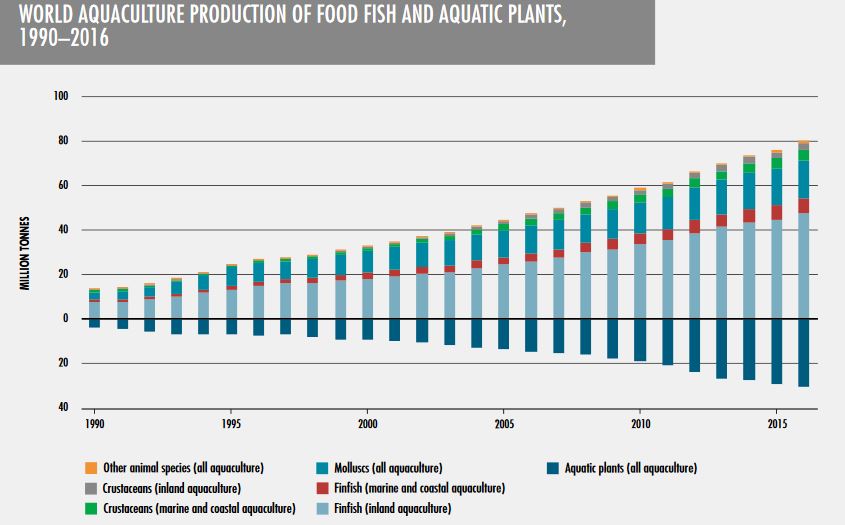 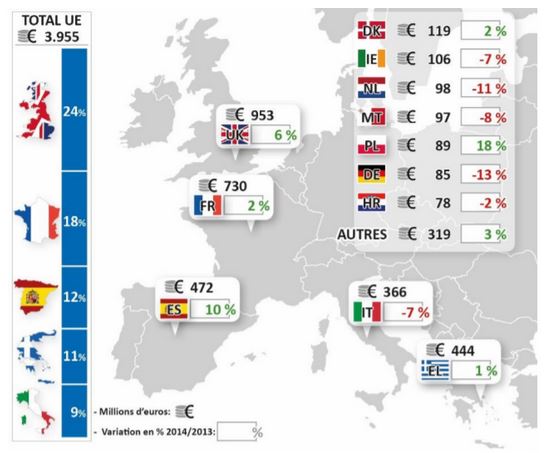 Farming methods are completely different from one species group to another. Fish are farmed on land in closed ponds or in the sea in cages, which require input (food). Shellfish are farmed at sea in an open space (on the ground, in pockets, on wires, on pilings, etc.) and are completely dependent on trophic input from the natural environment.

Given the increase in aquaculture production and the limit reached in farming feed fish (for processing into oil and fish meal), aquaculture feed is increasingly becoming plant-based. In fact, the portion of protein from wild fish in the feed is decreasing as it is being partially replaced by plant ingredients and, since 2017, insect meal. Another avenue of food sector research is focusing on boosting the feed conversion ratio. This coefficient expresses the quantity of feed required to produce 1kg of fish. For instance, the coefficient for salmon has dropped from 4 in the1960s (before extruded feed arrived) to 2.45 in 1985 and 1.1 in 2007 (Agreste, 2011).

France has world-renowned expertise in new and marine aquaculture, namely in producing juvenile saltwater fish, but has not been able to significantly grow this sector despite proactive European policies. Growth is primarily hindered by conflicts of use as well as coastal property access that is complex and costly. A large portion of the juveniles produced in France are therefore transferred to other countries (namely Greece) for the fattening phase, with the added bonus of cheaper labour costs.

French and European oyster farming has been experiencing a major production crisis since 2000. An infectious herpes virus (OsHV-1) causes mortality amongst the juveniles and results in stock deterioration during the first year of farming. Since 2008 a variant of that herpes virus, combined with the presence of a bacteria (vibrio), has also affected adult fish. The reasons for this animal health crisis have not yet been fully explained.

–        Integrated multi-trophic aquaculture: Polyculture system combining various species or species groups to create farming synergies. Waste from one species is used as a resource by another (e.g. fish, shellfish and algae).

–        Aquaponics and aquaculture in peri-urban areas: Growing trend where aquaculture and plant productions can be paired up. Fish waste is used as a nutrient source for the plants. This system of water recirculation can be established in urban and peri-urban areas, as close as possible to consumption centres.

–        Insects and micro-algae as protein sources: Incorporating insect meal has been authorised for aquaculture feed since July 2017. Many companies are experiencing growth in this market (Entomo Farm, Ynsect, Micronutris, etc.).